Thinking About Thinking Like A Mountain by Curt Meine

I’m in my office today at the Aldo Leopold Legacy Center, just a mile or so from Aldo Leopold’s iconic “shack” in Wisconsin. We have just concluded our staff meeting, a good portion of which was spent swapping stories about screening our new documentary film Green Fire. Various representatives of the Leopold Foundation have been fanning out to participate in screenings that are occurring across the country (and even overseas). Every place, and every audience, is different. But it is also fascinating to discover the common threads in our conversations.
The title of the film, of course, comes from “Thinking Like A Mountain” and Leopold’s youthful experience in seeing “a fierce green fire” in the eyes of the dying mother wolf that he had shot. In examining Leopold’s life and the continuing evolution of the land ethic, the film explores the history of that particular experience, and of the multiple potential meanings of the phrase. Along the way, we interviewed two special colleagues who remarked upon the phrase “green fire.” Peter Forbes (whom I’ve mentioned elsewhere in this blog) comments in the film: “In that one essay, that one moment when he saw the green fire, that was a transformational moment in his individual life. And it also suggests the transformational moment in our movement if we are willing to change ourselves.” And N. Scott Momaday, the eminent Kiowa writer and poet, remarks: “We all have the essence of the fierce green fire, that’s again our hope.”
My colleague Dr. Stan Temple mentioned in our meeting that, at a recent screening of the film in Idaho, staunch opponents and proponents of wolves were both present in the audience (as, no doubt, were many who are somewhere in the middle). In at least some of the conversations Stan had, the film seemed to provide a bit of a buffer zone in the pitched debate over wolf conservation and management. By illustrating Leopold’s experience with the green fire, we hoped that we could show that these are not simple or purely partisan political issues, but complicated matters of evolving conservation science, ethics, policies, and practice. So my questions for the day: What is the “transformation” and “change” we need to make in the conservation movement? What is the “essence of the green fire”? What meaning do you find in Leopold’s phrase? Is it possible in today's harsh political landscape to find common ground? What will it take?

[Editor's Note: See also the Forest Service's podcasts about the film Green Fire. Steve Dunsky speaks about how Leopold’s vision ties in with the evolving perspective of the Forest Service]
Posted by Curt Meine at 5/05/2011 01:38:00 PM

I'm glad you posed those questions, because they echo some of the questions rolling around in my head since I read your essay and reread Leopold's Thinking like a Mountain.

I certainly have a cerebral understanding of this green fire, but not a visceral one. My "conversion" to the land ethic did not happen in one seminal moment. Instead, I've always thought I had a green spark that was (unknowingly) nurtured over time by personal experiences and relationships. I suspect that many people might relate the same story, a growing ethic over time rather than a transformational experience.

I think this is something that can be cultivated in most people. We all have access to "green combustion" whether fire or spark and a land ethic that will develop alongside. In my case, it was a strong sense of place, of the hills where I grew up, of the farm I worked in the summer, of the swimming holes I visited, etc. etc. While I no longer live in my childhood state, no longer work that farm, and (thankfully, some might say) visit those swimming holes, those are the green sparks, the seeds of a land ethic in my life. An ethic, once established, that grows more inclusive over time.

I think what Tom Brown found, as described in his book 'Tracker', touches on that which Leopold called the 'green fire.' As an apprentice under the teachings of an elder Lipan Apache, Brown discovered the spirit and cycles of life in the wilds of the New Jersey Pine Barrens. To the point that he became one with the wilderness there.

I would like to agree with Scott Momaday, but I also wonder if that green fire has been reduced to a dying ember in most of us. We have lost empathy. The challenge is to reignite that fire before all follow the same demise of the wolf.

Gary, I think your expereince is actually quite similar to Leopold's. It's pretty plain that Leopold's "green fire" experience was not immediately transformational; it took many years, and much more life experience, for it to emerge so powerfully in "Thinking Like a Mountain." But I've also always thought that the moment did mark Leopold. You get the sense that he almost resisted looking straight into the depth of that green fire until he could no longer avoid it. It takes courage to change oneself; finally Leopold found the words to do so. I know I have had my own "green fire" moments in life. We return to them again and again in our minds and memories. I think they work on us....

Macrobe, your point is an important one to say aloud. I like the ember metaphor. I can work with embers!

On the opening page of Once and Future Land Ethic, you've included a great quote from Leopold, "I have purposely presented the land ethic as a product of social revolution because nothing so important as an ethic is ever written."

What do you think Leopold meant by this? Is the unwritten ethic in fact this green fire we carry within us? If so, how do we cultivate it on a scale that matches Leopold's social revolution?

Thanks for highlighting this key sentence. I'd probably read it a couple hundred times before its deep significance finally struck me fully. (Note, however, that Leopold's phrase actually is "social evolution").

I believe Leopold meant it quite literally: he realized, even in the act of writing an essay called "The Land Ethic," that an ethic is not written on paper (much less in stone!). Rather an ethic is an expression of a community's collective judgement of right and wrong behavior; it exists as a guide to action based on the values, knowledge, experience, insights, aspirations of the community, and on the individual's social conscience as a member of the community. An ethic may from time to time be expressed in written form, but will continually evolve in response to new information and new understanding of community life.

I regard Leopold's statement as so significant because, by including it in his essay, he in fact made it possible for the land ethic to expand and grow beyond his own efforts to define it. He opened the conversation up to all who care to contribute to it, drawing upon their own philosophical, religious, scientific, legal, and cultural traditions and expressions. He includes the reader in the discussion; gives the reader, in fact, marching orders to join the conversation.

How do we cultivate the ethic? In as many ways as humans are able to relate and connect and grow! For some that may mean discovering the deep earth insights of their own faith traditions. For others, it may mean encouraging reflective discussion and action (formally or informally) in their home communities. For others, it may primarily mean guiding their kids toward a critical and caring attitude of respect for the natural world. For others, it may mean working toward healthier people-land relationships through reforming our food system and economy.

It's all that and more. We "write" the land ethic with every decision we make, every interaction we have, every vote we cast, every organization we participate in. Because in all those ways, we can contribute to the character and health of the varied communities to which we belong. What Leopold asks is that we include the "soils waters, plants and animal" -- the land -- in our definition of community. And he asks that YOU and I join the "thinking community" is shaping the next phase of ethical evolution.

Curt, I have really enjoyed this week. I found your insights (and those of the commenters) to have many layers and it gave me pause. I have not only learned new things but taken moments to reflect this week. Thank you, everyone

Thank you, Harper. It's been fascinating me for me as well to see these essays through others' eyes. I'll post once more and then turn it over to Will Stoltzenburg. Keep on reading! 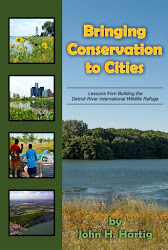